Gunnar Siekmann studied Physics at the Universities of Bielefeld and Muenster and is the author/co-author of two scientific publications (G. Siekmann, H. Winter Physical Letters A 187 (1994) 225 and H. Winter, G. Siekmann et al. Nuclear Instruments and Methods B 135 (1998) 372-376).

From 2004 till 2006 Gunnar Siekmann studied "European Industrial Property Law" in an advanced University Program and was awarded with the academic degree of Master of Laws (LL.M.).

In 2004 he was appointed by the Federal Ministry of Justice to the examination board for patent attorneys. He was a member thereof till 2009.

Gunnar Siekmann is lecturer for "Intangible property right law ", as well as for the module "Innovations and their backgrounds" in the course of studies "Innovation management" at the University of Oldenburg.

Gunnar Siekmann is specialized in preparing and prosecution of German, European and international patents, trademarks and designs, as well as on the respective law enforcements. He has the most professional experience with patents in the field of automobile technology, energy management and transport technology. 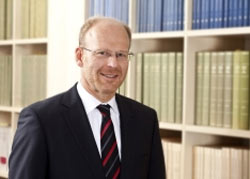