In 1993 and 1994 he worked in a development department of the Siemens AG in Munich.

Furthermore, Johannes M. B. Wasiljeff has been an authorized representative before the European Patent Office since 1999.

Furthermore, he is an authorized representative before the World Intellectual Property Organization (WIPO) in Geneva (Switzerland), which is responsible for international patent applications and international trademark registrations.

Johannes M. B. Wasiljeff is specialized in preparing and prosecuting German, European and international patents, trademarks and designs, as well as in patent infringement cases. He has the most professional experience with patents in the field of electrical engineering, communications engineering and acoustics, as well as general mechanical engineering, machine tools technology and automobile technology. 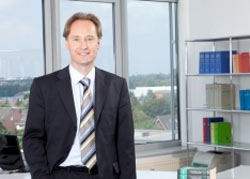