Since 1998 Matthias Jabbusch has been an authorized representative before the European Patent Office. Furthermore, he has been active as European Trademark Attorney since 1998 and since the implementation of EU-patent designs in 2003 he has also been active as European Design Attorney before the Office for Harmonization in the Internal Market (OHIM) in Alicante (Spain). He is also an authorized representative before the World Intellectual Property Organization (WIPO) in Geneva (Switzerland), which is responsible for international patent applications and international trademark registrations.

In 2006 he graduated in an advanced University Program "European Industrial Property" and became Master of Laws (LL.M.).

Matthias Jabbusch is lecturer in patent law at the University of Applied Sciences for Economy and Technology in Vechta and at the Leibnitz-Academy of Hanover.

He is specialized in preparing and prosecution of German, European and international patents, trademarks and designs, as well as patent infringement cases. He has the most professional experience with patents in the field of electrical engineering and general mechanical engineering. 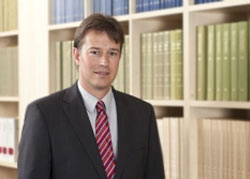